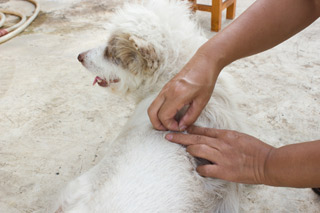 After the record breaking amounts of snow and extreme cold of the past winter, the presumption might be that last year’s Fall season tick population probably did not survive. However, according to some scientists, snow acts as an insulator and may have protected ticks from freezing. The prediction for this spring’s tick population is that of high numbers. Protecting your dog from tick bites and possible Lyme disease infection will require vigilance on the part of all pet owners.

Lyme disease is caused by the bacteria, Borrelia burgdorferi, carried and transmitted by ticks. Not all ticks carry the bacteria or transmit Lyme disease. The primary culprit in the northeast is the deer tick or Lxodes  Scapularis. The ticks that carry the disease have at some point fed on blood from a deer mouse, (in no way connected to deer). Deer mice are wild mice often seen scurrying around in wooded areas. The mouse passes the bacteria to the tick which them transmits it to another animal when it feeds off of it. The tick is looking for blood when it attaches itself to a human, dog, cat or other mammal. It burrows head first under the skin and feeds off blood. It is estimated that an infected tick is attached to a body for 24 to 48 hours before it transmits the bacteria. Unless spotted visually most humans or animals are unaware that a tick is present.

Although Lyme disease has probably been around since the late 1800’s it was not officially recognized or given a name until 1975 when a cluster of children who lived near Lyme Connecticut came down with the same symptoms, hence the name Lyme disease. Most of what we read about Lyme disease refers to the symptoms experienced by humans, however, the symptoms in dogs are very different. The common “Bulls Eye Rash” often seen in humans is not present in animals, and since the canine symptoms mimic the symptoms of many other conditions it can be difficult to diagnose. It is often the last medical condition to be tested for. 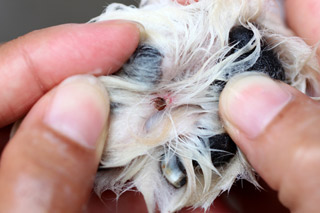 For most canines, symptoms may not appear until two to five months after the bite making it difficult to equate a past bite with the current symptoms. In some cases symptoms may not appear for a full year. The most common symptom is arthritis like stiffness and lameness due to inflammation of the joints causing pain. The difference between arthritis and Lyme disease symptoms is called “Shifting Leg Lameness”.  The lameness will appear in one leg, generally a front leg, and then disappear only to reappear in the same leg or another leg, disappear again and reappear in another limb. Other common symptoms include fever, loss of appetite, swelling of lymph glands, lethargy and walking with a stiff gait or an arched back that indicates pain. Although rare, Lyme disease that is untreated for a long period of time can cause serious kidney problems in dogs.

If your dog is displaying any of these symptoms a visit to your vet is in order. Lyme disease is diagnosed with two different blood tests. Although these tests are sometimes inconclusive or give false positive results, advanced testing results along with symptoms can almost always give you an accurate answer. The treatment after positive diagnosis is a regimen of antibiotics. Depending on how long the dog has had the disease the treatment could be quite lengthy. In some cases the symptoms recur and the treatment will need to be repeated. It may take some time but antibiotic treatment has been shown to be quite effective in eradicating the disease. 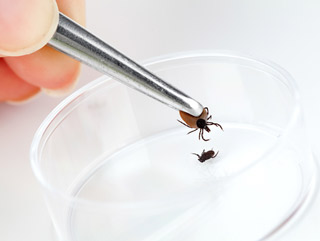 The best course of action is prevention. Ticks are particularly prevalent in heavily wooded areas near the northeast coast. They are most active from early spring until late fall and live in tall brush or grass. If your dog is free to roam in your backyard, remove tall weeds, keep the lawn mowed, keep trash cans covered, remove any waste or garbage that might attract mice and check your dog for ticks often. If you take your dog hiking with you or for walks in wooded areas or parks it is wise to check for ticks after each walk. In recent years urban areas have seen an increase in canine Lyme disease as the tick population has increased. Parks, playgrounds, walking trails, empty lots or unkempt yards provide ideal homes for ticks. Dogs living in cities or urban areas are not exempt from exposure to Lyme disease.

If you find a tick on your dog, precautions should be used in removing it. Using tweezers, grab hold of the tick as close to the skin as possible grasping the head and mouth area and pull straight out. Do not twist. Be sure you have removed the head and all other body parts. Be careful not to grasp the tick in the middle of its body as that will likely release blood that could transmit infection to you or your dog. It is a good idea to wear gloves, clean the site with alcohol or a disinfectant after removal and carefully wash your hands. There is no evidence to suggest that an infected dog can transmit Lyme disease to a human.

There are many preventative treatments on the market including flea and tick collars and topical ointments. A Lyme disease vaccination is also available, although there is an ongoing debate among veterinarians about its effectiveness. Some believe symptoms can be worsened by the vaccine if the disease in contracted, others believe any protection is better than no protection. Many vets recommend an annual Lyme disease screening as part of a routine checkup.

The best strategy for avoiding canine Lyme disease is to be aware of your dog’s surroundings and to check for ticks routinely. If you live in a heavily wooded area, the risk for infection is higher and more vigilance is required. Talk with your vet to determine the most reasonable preventive measures for your individual dog based on its risk, take precautions and then enjoy being outside with your pet during the beautiful spring, summer and fall weather.